Here’s the France style/sewing wrap up before I expire from aesthetic overload:

1. What would a trip to France be without a pointless pilgrimage? Recognize this staircase?

Yeah it’s this one!

It’s Chanel’s atelier at 31 rue Cambon. Last time it I walked by it was locked, but this time the guard let me come right in and take some pictures. Wowza. Why didn’t I do a selfie?

But since Madeleine Vionnet won the Chanel/Vionnet Smackdown post, I also had to pay homage Vionnet’s first atelier, at 222 rue de Rivoli.

Kind of touristy now, but the view of the Tuileries across the rue de Rivoli remains the same.

2. A lot of formerly hot French guys are walking around wearing Wranglers. Wranglers! You don’t look like a cowboy, you look like Uncle Buck. Stop it. You’re bringing down Western civilization.

3. Though this looks like a picture of me eating lunch, drinking wine, and wishing that a magic carpet would transport me to my hotel so I wouldn’t have to ski down an entire Alp to get there, I’m actually testing a design by American Look creator Claire McCardell. She was a skier as well, and in the 40s she developed a wool jersey top with what was then called a “Superman hood” to keep her ears warm.

This was back in the days when the concept of “separates” was very new, and jersey was just beginning to be used for “sportswear,” as before that women didn’t do sports because they were walking around in corsets trying not to get the vapors. (Okay, I’m skipping a few parts of fashion history, but you get the idea.) McCardell, on the other hand, was one of a new breed of sporty, independent women, so she created designs to fit that lifestyle.
You can see this example of McCardell’s Superman hoodie in the online archive of the Metropolitan Museum of Art’s Costume Institute. http://www.metmuseum.org/Collections/search-the-collections/157132?rpp=20&pg=1&ao=on&ft=claire+mccardell&pos=2 That archive is such a good time-waster.
The black Patagonia top I’m wearing in the picture (from their fall 2013 “collection” http://www.patagonia.com/us/product/womens-merino-3-midweight-hoody?p=37145-0&pcc=1147) is made of merino wool jersey, and has a hood that is virtually the same cut as McCardell’s. It’s easy to wear, not too hot, not too cold, and the hood works fine under my ski helmet. It’s ironic that merino wool jersey is now being touted as the miracle fabric for sports, (Insulating! Stink-free!) when McCardell was talking retailers into the same thing more than 75 years ago.

4. More bling from rue de Seine. The round compact that looks like a telephone dial is credited to the Surrealist Artist Salvador Dali, but it was from a 1935 collaboration with designer Elsa Schiaparelli. According to the New York Times, one of these compacts was recently listed on the website 1st dibs for $50,000.

At some point I’ll get around to writing about the single-sleeved Schiaparelli wrap I whipped up last winter, which I’m worn a lot more than my Chanel jackets. Something about it really wows people.

It’s a fun project, and the reissue of the pattern is available from Decades of Style http://www.decadesofstyle.com/vintage-patterns-1950s/5006-1950s-stole. Last spring, I won a Threads Magazine competition by creating this Pinterest page about the project http://www.pinterest.com/juleseclectic/make-your-own-schiaparelli-wrap/. For my prize, Threads sent me a Bernina Swiss Army “Ladies Knife,” full of sewing tools, which thrilled me beyond words, no joke.

5. Love the printed pattern on this light all-wool scarf from Ventilo.

Every year when we come to Paris, the boxes of clementines in the outdoor markets are a bright spot in the winter gray. Thanks Santa.

6. Here’s what was in vintage dealer Didier Ludot’s shop window (in the Palais Royal, just north of the Louvre):

After I go on my gluten, dairy and food-free diet, I’m going back for that ivory beaded Balenciaga with sleeves in the back.

7. You may recognize Paris’ Grand Palais from Chanel’s last few collections, when the giant hall, built for the 1900 World’s Fair, looked like this:

For the holidays, the French set up an indoor amusement park inside this Beaux Arts wonder.

Fifteen Euros covered admission and all the rides! My 12-year-old was in heaven. They also set up a temporary champagne bar in the hall with a chanteuse singing Piaf. So much better than Disneyland Paris.

No words for his perfectly executed and interpreted solo in Act 2. In the last act, the chorus’ costumes were all in a dusty palette of pink, yellow, peach and ochre, like the set, so that the soloists’ jewel-toned costumes popped out in front of them. Yes, I am a dance nerd, too.

9. And lastly, thanks to the egging on of a number of readers, I did fulfill my threat to go back to Janssens et Janssens and look for black tweed for Chanel #5, the punk meets steampunk little black jacket. I was the only one in there, and in the midst of a long French conversation with the unfailingly friendly saleswoman, I went into some kind of fabric trance, leading me to walk out with some lightweight, all-wool Italian tweed with subtle houndstooth texture (but dark enough that you don’t have to match it, um, I hope), black trim with gray flecks and leather(ette) tubes running lengthwise (punky!), and a black chain sewn onto black satin ribbon to speed up the boring chain application part (and it’s steampunk, really, or clockpunk. One of those). Lining TBA.

Word up about Janssens, they hate doing the paperwork for tax-free shopping, so if you ask for the “detaxe” they’ll tell you it’s a problem (for whatever reason), but because you’re so “nice” they’ll give you a discount.
I’ve dubbed this project “The Kaiser” because that’s what people call Karl Lagerfeld, though probably not to his face. I’ll be working on Chanel jacket #5 in the fall, although at this rate it could end up being fall 2020 after my son graduates.

But now that I’m back from Paris when it drizzles to Boston when it’s a slush heap, I’m thinking about projects for my next trip, an early March long weekend in Los Angeles. This light Italian wool with printed sequins that I got at Janssens will be just right for LA’s “winter” weather.

And I need to bust my fabric stash before I go to LA’s newish mega Mood Fabrics store and the third floor vintage fabrics room of International Silks and Woolens.

Less blabbing on my blog, more sewing!
What are you working on in your part of the world?

Hello again, friends. Having been forcibly removed from Paris by train and coerced by family members into days of sliding down an Alp on a couple of laminated boards, which was then followed by slumber-inducing 5-course French meals, I haven’t had the opportunity to update you about the Paris sewing outpost that puts the FAB! in “fabric”.

In a previous post, I wrote about last year’s visit to Janssens et Janssens during which I pounced on the remnant table and then attempted to move into the place permanently, as I had basically spent the mortgage before I left.

Like mecca, I had to return. Feast your eyes on those delicious tweeds.

The fancy stuff’s in the basement.

I found a couple of trims that have chains woven into them. So much easier to sew on if you’re making a French jacket:

All of these things pictured can be found at Janssens et Janssens, at 3-5 rue d’Anjou, at the corner of rue Faubourg St. Honore (janssensparis.com). While I was there, I bumped into another American blogger and fellow Chanel jacket obsessor, Mary, of the blog “Cloning Couture.” She’s already whipped up a pretty spiffy tweed jacket, and I’ll be watching her blog to see what she makes from her Janssens haul.

So now after my nightly couple three glasses of wine, I’ve had time to reflect on the year ahead. I’m going to move on to American Look designers! I’m going to make things that are easy and fun! I’m going to endeavor to make a dent in my massive fabric stash, and in the meantime, not buy anymore!

But really what I’m thinking is…the minute my feet hit the ground back in Paris, I am running to Janssens et Janssens, to get me some black tweed. See, I bought some antique brass snap tape at Bon Marche, and the grosgrain with brass chain imbedded in it at Janssens (above), and well, I think it’s time to bring the funk to Chanel.

I’m talking a Steampunk Chanel jacket. Steampunk is a look cooked up by people who got tired of being punk or goth or anime or whatever and came up with this Buck Rogers meets Wild Wild West (60s TV show that’s impossible to explain) look where they dress like Edwardian aviators or motorists and decorate their iPads with antique watch 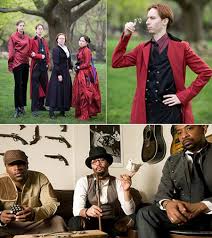 parts. It’s a great look for the guys, though the women tend to look more like Liza Doolittle (pre-makeover), “Little House” schoolmarms or Miss Kitty, the saloon girl from Gunsmoke, and I say this knowing I’m going to get in trouble with the entire Steampunk community for this post. Just google it. I’ve got to hand it to the Steampunk people, though, they really get their sewing on.

As a vintage sewing hack I was thrilled when my son wanted to be Steampunk for Halloween, and in the midst of cranking through Chanel jacket #4, I powered down and made him a Steampunk vest, in the course of which, I learned to bag a lining. From a Big Four costume pattern!

Chanel herself was plenty Steampunk, what with the Liza Doolittle hats and layers of hardware. And Lagerfeld, well, all you have to do is make his outfit sepia-toned and he’s good to go. 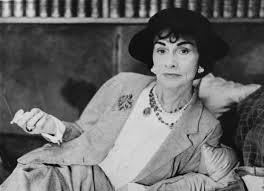 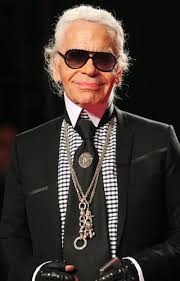 So the jacket of my reverie is going to be black, with antique brass snap tape to hold it together, and a brass chain tape at the bottom. It will need a lining that’s either Beaux Arts flowery or maybe 20s Singapore Chinoise. Will I try to bag it and then quilt it? Or stitch the whole thing together wrong sides together and fringe the raw seams then quilt it? (like I did in Chanel jacket #3, my “fake it till you make it” Astronaut Wives Club raw silk job) And the trim, the trim, hmmmmm… this is how I get in fabric trouble.

Was I dreaming? I believe that if you’re in your mid-fifties and still doing vintage (and honey, I was a 40s pin-up in the 70s, when old clothes first became “vintage”, and young Bette Midler was singing “Company B”), vintage needs to be a) wearable in public, and b) not too costumey. And it can’t look like it’s still in your closet from way back when.

And when you make a Chanel jacket repro, you do run the risk of looking like granny having brunch at the country club. So you’ve got to funk it up.

Steampunk Chanel. Of course! All of those chains and faux baubles, so Machine Age. Another glass of wine and I’ll have figured out that trim. What do you think; should I go for it?