Remember how excited I was about trying out this 60s Vogue pattern by Madame Gres, made with thin wool jersey and underlined with power mesh? 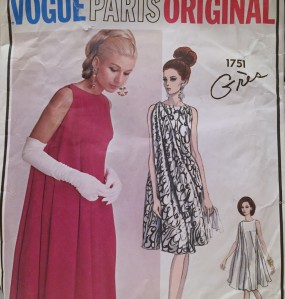 I made up a muslin (info in this post) and got a lot of nice feedback both here and on InstaGram. I was ready to go!

Then I took a closer look at the directions, which include things like making a hand-rolled hem, something that takes the folks sewing Hermes scarves YEARS to learn… 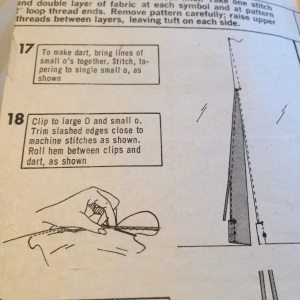 (Check out this Blogger’s post and you’ll understand why Hermes scarves cost $400.)

Not to mention a side slot zipper that had “hours of hand picking” written all over it. (Oddly, the instructions were printed on the pattern.)

So I started to think, boy, this is going to be a pain in the ass. An old Monty Python sketch started running through my head, where Michael Palin, an accountant who wants to be a lion tamer, tells John Cleese that his job is “tedious and boring and DULL” and, well, just have a look:

Meanwhile, in the next room, my 13-year-old son was complaining about a “take-home” test in American History and stressing about the War of 1812 (anyone?), the Whiskey Rebellion (anyone?), Pinkney’s Treaty (anyone? Except you, Lizzie of The Vintage Traveler, former middle-school history teacher…).

So I put on my “mom voice” and said, “the stress will go away when you’re done.”

Then I realized that that was what MY mom would have said, so the next day, I got out that fine wool jersey and did a layout that took up the entire length of the bedroom floor: 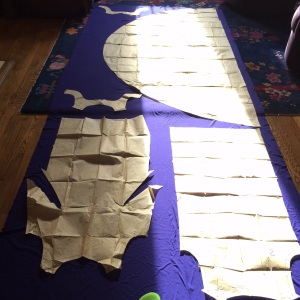 Did the alterations that I knew the pattern needed on the sides (from having fit the muslin): 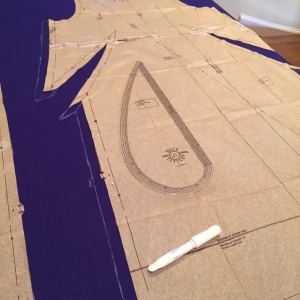 And figured out a way to hang the big drape, so I could hem it before I put it on the dress. I didn’t think there would be a problem with the bias shifting with a knit, but I did it just in case: 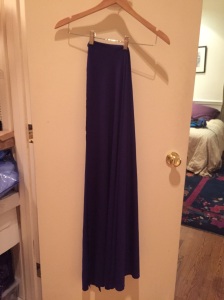 Then the blizzard hit, so I took advantage of the snow day to cut and mark the powermesh lining, using a marker to speed things up.

I had already marked the wrong side of the fashion fabric with wax sheets and a tracing wheel. The interior was going to be a little messy, but I got over it. 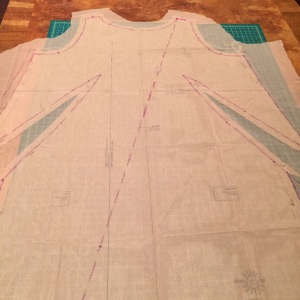 I figured if George Clooney and I were somewhere out of earshot of our spouses, and suddenly he got fiesty and ripped off my dress, he would be enough of a gentleman not to say, “boy, you really should have put in some kind of lining, even though it would have made the dress more bulky, because, dammit, those magic marker lines look like crap.”

(I put that picture in for my friends Darcy and Christine, who don’t really sew, but read my blog anyway. Isn’t he dreamy?)

As much as I wasn’t feeling it, I hand-basted (“thread traced”) the fashion fabric to the underlining at the darts and the line where the drape will attach. I’ve just found it’s so much easier to manipulate darts with underlining if you take the time to do this:

I wasn’t about to thread trace all the way around, so I attached the underlining to the fashion fabric around the edges by using a long, narrow zigzag about 3/8 inch outside of the seamline.

My Bernina 560, Karl, was so happy to be back in action, his walking foot was jumping up and down! The walking foot kept the layers together and even. (For details about how Bernina is loaning a B560 and walking foot to assist with these vintage projects, click the “Bernina Collaboration” tab.)

Yeah, it was still snowing!

When I went to pin the darts, the thread tracing made it so much easier to line everything up, it was worth the effort.

I basted the whole underdress together, and saw that the fit wasn’t too bad.

I also saw that it was time to get back to the gym. But since the dress was stretchy, I knew I could jettison putting in a zipper, which made me delirious with joy.

Then the next day, when the whole town was digging out:

I decided to use light knit fusible on the neck facings, to speed things up. I turned up the bottom edge by 1/4 inch and edgestitched it. 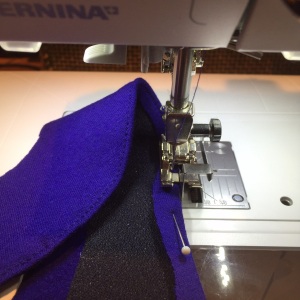 So I’m getting there, but I still have a way to go:

The snow’s not going anywhere anytime soon, either!

Anyone else’s sewing stuck in the snow? Keep shoveling!