So I was up on stage with Pink Martini, the retro band that celebrates worldwide lounge music with a hefty side of camp. They had invited roughly half the audience to join them in singing Helen Reddy’s 70s feminist anthem “I Am Woman,” and since I was lubricated with a beer and wearing my second Papercut Patterns Sapporo Coat of the season, I felt a need to get up and belt, “I am STRONG I am INVINCIBLE–I AM WOMAN!! (That’s me selling it on the far left.)

(At that moment, it became official–I have no shame.)

Here’s a look at the coat up close. I used many of the same pattern modifications as I did on the Sapporo Coat I made last fall, but also took this one in 4″ under each sleeve, and 3″ in on each side seam, tapering toward the hem to preserve the cocoon-coat shape. The fabric is silk/wool and the lining is hammered silk.

I felt the Pink Martini experience was the perfect culmination of a year where I was supposedly working hard on a project, but in truth was living the ethos of their song, “Sympatique,” which roughly translates French to English as “I don’t want to work, I don’t want to have lunch, I only want to forget, and then smoke.”

But in my case, it went “Don’t wanna work, not skipping lunch, already forgotten everything, so then, I sew.”

When I saw this article in the New York Times about “procrasti-baking” (where people put off working by baking something delicious), I realized that, in truth, I was “procrasti-making,” which was a lot better for my wardrobe and waistline.

Not that things weren’t happening. In the fall, I received an email from the Museum of Modern Art asking if I wanted to do a couple of fashion history/sewing workshops for their “People’s Studio.” (Here’s the story of how I got involved with MoMA.)

Would I?! I’ll be right there! Then I read further. “The subject is ‘mending.'”

I felt that it wasn’t an appropriate time to mention that the running joke among sewing peeps is “no, I won’t hem your jeans–alter your prom dress–make your curtains for free hahaha.”

But you don’t get an offer to present at a major museum every day, and I was thrilled to be involved in their exhibit Items: Is Fashion Modern. So I spent Thanksgiving brushing up on mending history: starting probably more than 100,000 years ago when humans began figuring out how to sew furs together using intestines as thread (ick); jumping ahead to the 25,000-year-old iron needles with eyes that were found in caves in France (the beginning of the French haute couture tradition, in my view); sprinting through the industrial revolution, the Depression, and WWII rationing; and wrapping up with the advent of fast fashion, when it became easier to buy cheap clothes, and toss them, rather than fix them. Unfortunately, fast fashion is an environmental and social justice disaster, so sewing and mending skills have become crucial again. Sewing is our superpower!

I put together a Power Point and a sewing project for participants, and though I hadn’t spoken in public since my son was born (he’s taller than I am now), I got my fanny to New York — hauling little Coco the Bernina 215 (a great travel machine) and my sewing gear on the train and subway, then rolling her from my sister’s apartment to MoMA, weaving block after block through the holiday crowds near Rockefeller Center with my little Tutto wagon (and it’s more uphill than you’d think). 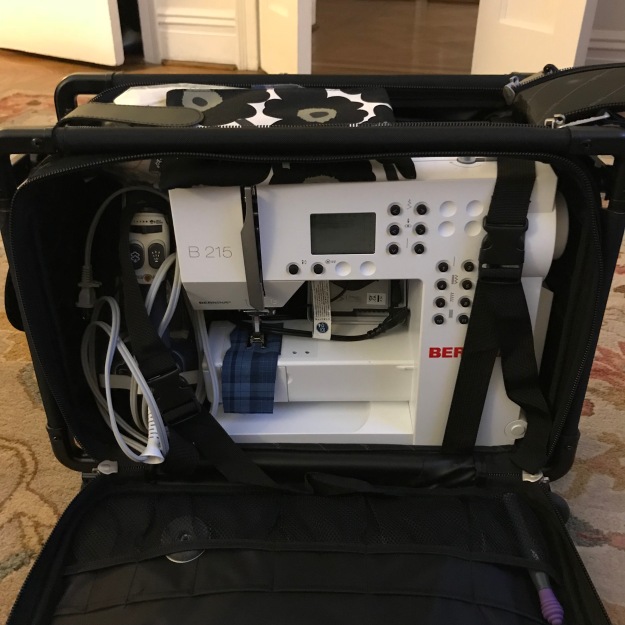 (Yes, my iron’s in there, too, because, as we all know, half of sewing is pressing.)

When I got to the museum, I truly wondered whether I was the first person to bring a sewing machine into that temple of modern art.

I was pretty nervous, to tell you the truth. 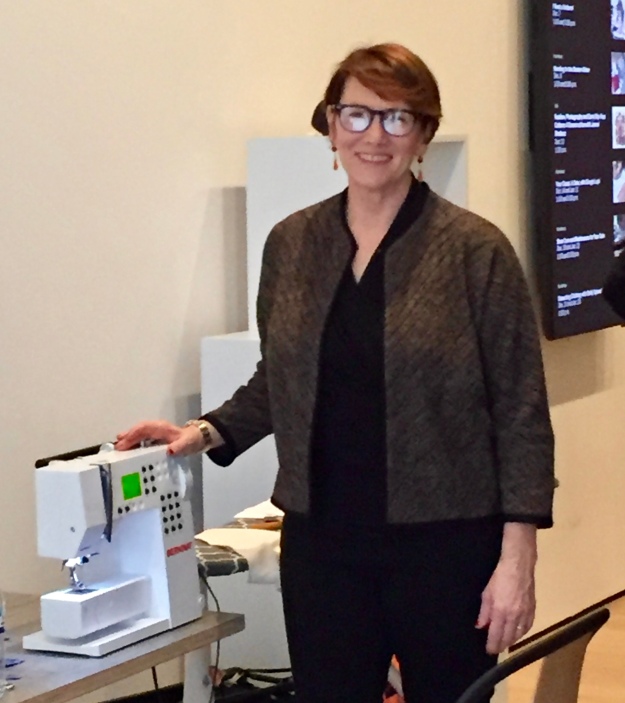 I was gratified that people from all walks of life had signed up to learn Japanese Boro mending from the 1600s, techniques for fixing and embellishing worn clothes with basic embroidery stitches (I used the recent Alabama Chanin book as a reference), a method for sewing on a button with no gnarly knots hanging out, and simple patching for jeans with a machine.

My sister, New York City bureau chief for Jet Set Sewing (and secret crafter who is knitting again — welcome back to the dark side, Janet) was there to take pictures and watch me hyperventilate as I tried to speak into a mike, operate PowerPoint, and demonstrate catch-stitching at the same time. 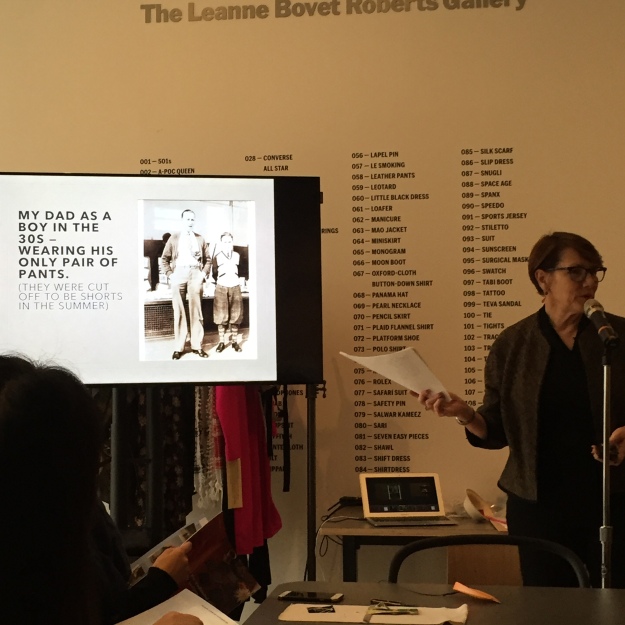 At one point the expression on her face looked so much like my late mom that I felt I had my female cheering section with me, so I gulped and moved forward to the story of how Claire McCardell invented ballet flats for streetwear during WWII — because regular shoes were rationed, but dance shoes were not.

Even though the workshop was targeted to beginners, I was happy and excited to see some of my pals from my blog and Instagram feed. I really enjoyed meeting all of you! Thank you for coming!

Later, when the museum featured photos from the workshops on their social media channels (with several million followers), I’ll admit it was a pretty big thrill for a middle-aged broad like me who’s spent a lot of her time in the past decade cutting fabric on the floor, tracing disintegrating vintage patterns, negotiating with her sewing machine, and digging through fashion history archives in chilly libraries. What an experience!

Phew! Made it through with flying colors, and caught my train back home on time! (Thank you for selling wine, Amtrak.)

After the holidays, I meant to get back to my project, I really really did, but so many other exciting (and distracting) things were happening!

Hm, so I guess I really was getting a lot done, and if you check out my Instagram feed, you’ll see that I actually have been working on a not-so-top-secret Claire McCardell pattern project. So “popover” there to see it! (Popover — that’s a hint!)

And now that I’ve gotten all of that sew-crasti-making out of my system, I’m ready to get more project work done!

Except — isn’t it that time of year when I always make a blanket coat?

I hope your sewing’s going well!