Karl and I have been putting in overtime around here…because after you make a 20s Schiaparelli that turns into a fugly Mom Jeans vest, you’d better get back on the horse right away.

First thing we came up with was a new version of the asymmetrical sweaterknit wrap I designed last year. I wanted another one, because during Boston’s epic winter (2 yards/meters of snow!) we were all bundled up in our massive puffer coats, then we’d go inside and either freeze or roast. So I kept the wrap in my bag and used it all the time in theaters and restaurants.

This new version uses French seams to finish the innards, and foldover elastic to bind the edges. The pattern and tutorial are free free free on the website WeAllSew.com.

Yeah, I’m getting my Judy Jetson on.

It’s part of Jet Set Sewing’s partnership with BERNINA of America. Details are above in the Bernina Collaboration tab. I can’t thank them enough for helping with all the vintage reconstructions going on around here.

And speaking of which, isn’t there a little part of all of us that wants to be a Hitchcock blonde? Even though she’s put in danger, hacked up, or obsessed about by Jimmy Stewart (and Hitch himself)? 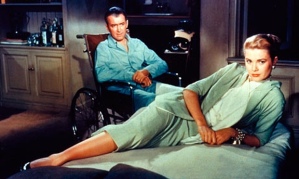 Edith Head did the costumes for most of the Hitchcock movies, including the ones that fashion people obsess about, such as “Rear Window,” “The Birds,” and “Vertigo.”

Edith Head released a series of patterns during that era from Advanced, all very Hitchcock in nature. You can hear my travails of making a bolero from one of the patterns in this post: “Long Live Edith Head” 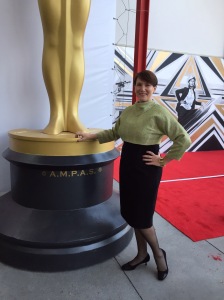 As a little pick me up, I decided to do a quick make of this “turban” in another of the Edith Head patterns:

What could be so hard about making a hat? It’ll be fun!

(Does anyone else hear ominous music playing in the background? Like the theme from “Psycho” where the violins go EE EE EE!?)

Just two pieces for the exterior, cut on the grain. 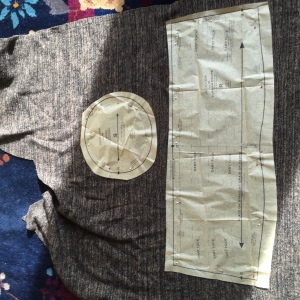 I made it from some leftover jacket fabric–a stable knit–and it was a quick go. The main part of the hat is gathered with some release darts of various shapes and sizes, then is attached to a round crown.

But you know that part of a Hitchcock movie when Mr. Everyman’s just going through his day, and then everything gets weird?

When I went to cut the lining, out of leftover silk crepe de chine, it was (EE EE EE!) on the bias!

(If you’ve ever cut and sewn silk on the bias, then you know that deep foreboding you have when every move you make could lead to a massive wadder…)

I knew I would need industrial-grade shears, just in case Norman Bates was coming to hack away at the silk with a kitchen knife.

(Kai Serrated Shears. The best ever for silk. Just go get some.)

Honestly, I’d rather go up to the top of that clocktower with Jimmy Stewart: 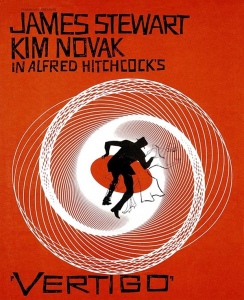 …than SEW A CIRCLE OF SILK TO A BIAS TUBE!!!

Sometimes sewing is so suspenseful.

Well, what do you think? Tippi Hedron, or Eleanor Roosevelt? I’m still on the fence: 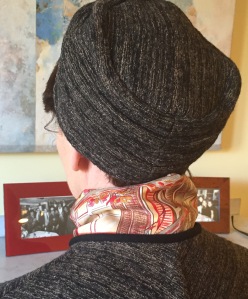 So then I moved on to a skirt I’d been thinking about making, based on 40s Claire McCardell dirndl skirt I have in my collection. The dirndl was her first runaway design hit in the 30s, based on traditional dress that she saw in Austria. During that era, she’d bought a funky farmhouse across the river from Bucks County, Pennsylvania, where people from Broadway, fashion and journalism were hanging out on weekends. Their houses were rustic and freezing, so she created warm, comfortable eveningwear, made out of wool jersey or tartan. She also pioneered stretch waistbands on skirts during World War Two rationing, using chest bandages.

So I put together a big skirt with a couple of deep McCardell pockets:

(Neither one of them was upside down this time!)

Then I decided to use a gathering technique I’d read about somewhere (the source of which, sadly, my brain refuses to cough up…):

You zigzag over a string of dental floss (unflavored, unless you want to smell minty) then pull it up. I was skeptical, but…

Goal! I sewed it with a zigzag onto a band of 3″ wide knit elastic, which comes under the heading of “where have I been” because it’s so soft and stretchy. I had already sewn the elastic into a circle and then enjoyed annoying my teenager by snapping it at him before I attached it. Once I had it sewn on, I took out the dental floss so the waistband would stretch. 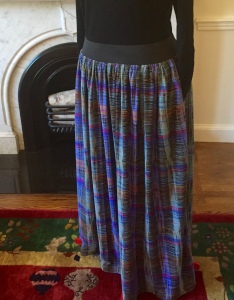 Thanks to a nine-foot by 13″ remnant of raw silk hiding in my stash, no one will every know!

Bring on the holidays; I’m ready to eat!

21 thoughts on “My Passion for Wide Elastic and Dental Floss! And Edith Rears Her Ugly Head”