I’ll admit that attending the Yves St. Laurent + Halston exhibit (at the Museum at FIT) threw me right into a disco pit of nostalgia, thinking about the early days of vintage fashion in the 70s.

Here are some photos from the exhibit, which compares YSL’s romantic costumes, culled from cultural history, to Halston’s streamlined, expertly-cut modern fabric columns. 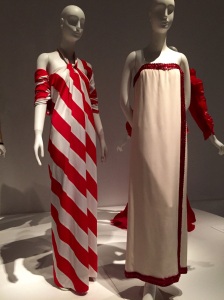 (In both cases, Halston is on the left, and YSL is on the right.)

But here’s what cranked up the nostalgia machine: a timeline in the exhibit, which compared what was going on in the careers of YSL and Halston in the 60s, 70s and 80s. 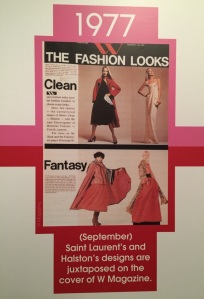 I hadn’t realized that while we 20-something girls in the U.S. were combing the thrift stores for what was just starting to be called “vintage,” Yves St. Laurent was being influence by retro looks from fresh faces like Paloma Picasso. Here she is with Andy Warhol, dressed in 40s chic. 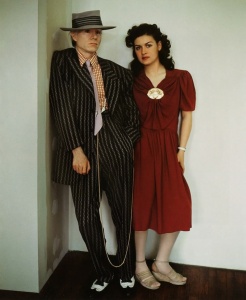 YSL’s collections from that era were inspired by 1930s Chanel designs, La Belle Epoche, Russian peasant gear, the Ballets Russes and Chinoiserie, among other things. 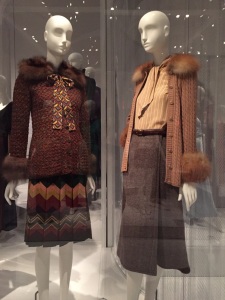 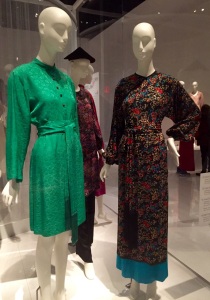 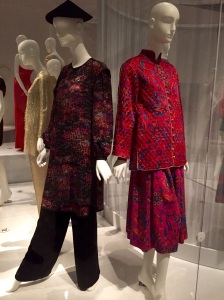 It was a thrill to see his iconic Safari jacket and Le Smoking: 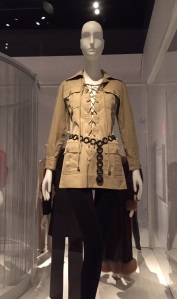 His “Forties” collection, in 1971,  was a critical flop, but it captured the vintage zeitgeist.

And here are the kinds of things we were wearing during that time in the U.S.: 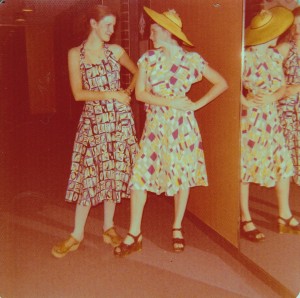 That’s me on the right with my roommate in our “co-ed dorm” (still a bad idea) at SUNY Purchase in 1975. We’re wearing original 40s dresses that I’d bought at one of the first true “vintage” stores. I think she’s wearing Kork-Ease platform sandals, too, which looked retro and were great for spinning around on the dance floor. 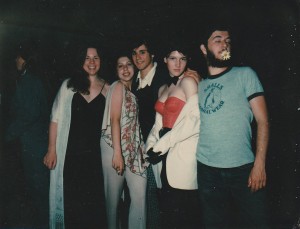 And that’s me the same year, wearing a “long-line” bra that I’d dyed orange, with a man’s white dinner jacket, black tie and elbow-length gloves, all thrifted. I can’t believe how modern everyone looks, 40 years later.

All I can say about our nostalgia for 30s and 40s styles was that it sprang from an intense desire to forget the decade before. The late 60s and early 70s in the U.S. were such a roller coaster. Vietnam combat on TV! Man on the Moon! Peace and Love! My Country, Love It or Leave It!

My husband, more than a decade older than I am, went from a Kennedy idealist to a drafted army lawyer, heading to Southeast Asia in an ill-fated war marriage. He was tasked with explaining the Geneva convention to a bunch of nice guys from small towns who, like him, really didn’t want to be there. 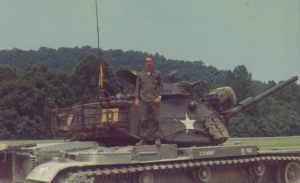 Even as a teen I could sense how quickly the country had devolved from an “ask what you can do for your country” mentality to “what the hell happened here?” By the time the troops withdrew and Watergate was over, we were exhausted.

When things started to calm down in the mid-70s, we just wanted to get on our feet again, and now the baby boomers were inheriting the place. And boy, were we tired of dressing like hippies.

So we went back in time. Bette Midler put on 40s rags and sang the Andrews Sisters. 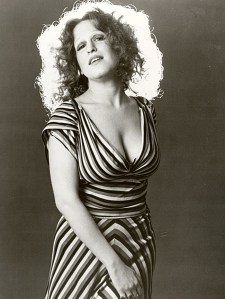 Manhattan Transfer put on 30s drag and revived a cappella.

After years of seeing scruffy, angry comedians in jeans and army jackets, Steve Martin put on a tailored suit and joked about “happy feet.”

When an older grad student boyfriend and I were watching that bit on Saturday Night Live, he turned to me and said, “you think that’s funny?” I knew immediately the relationship was over.

My late-70s peers and I really were the first group of women who weren’t expected to find a husband and get married right out of college. So we put on wrap dresses and went dancing.

We were so glad when the guys cut their frizzy hair.

The book “Cheap Chic” became my bible, because it explained how to put together thrifted outfits, raid the men’s department for a menswear look, and use the army/navy store as a resource for retro/chic pieces like button-front navy pants. 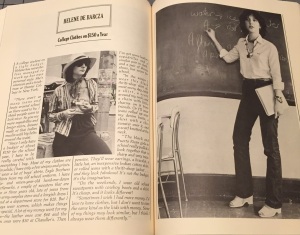 What great news that Cheap Chic has been rereleased! I just saw it on Amazon.com.

It even included an interview with Yves St. Laurent, talking about how his designs were being shaped by late 60s anxiety in France, which he was feeling in his visits to New York:

We were sewing, too. During that time, you could buy really hot current patterns by DVF, John Kloss, Willi Smith, Halston, Clovis Ruffin, Kenzo and Betsey Johnson. Here I’m wearing one of her looks that I sewed at 18, and my roommate’s wearing a maxi-skirt I made: 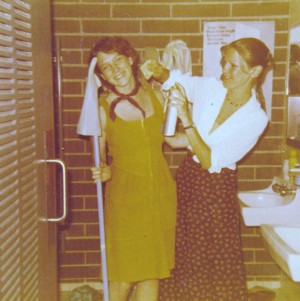 Back then, Betsey Johnson was a star of the kicky-youthful-vintage inspired look, and though her clothing wasn’t available in my northern Michigan hometown, her patterns were. So basically, we were creating a new generation of style out of thrifted clothes and Qiana fabric.

Here are some of those early vintage/boho Yves St. Laurent patterns released in the 70s, cut from his retail designs. 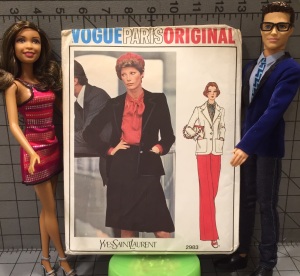 So how does Kenny Loggins fit into this whole thing? Somehow I got his hit “Heart To Heart” stuck in my head, which is from the early 80s, but is still part of this era. I must have heard it blasting in the grocery store, which completely galls me because I don’t want to listen to music I used to make out to while I’m buying yogurt.

Even though it’s embarrassing to admit that I like this song, it is a great example of “blue-eyed soul” record producing in my view, so when it got to that crescendo, right when he’s singing in his head voice: “this is our final chance to touch each other’s–” I did not appreciate having the store public address system suddenly break in with “SEAFOOD! YOU HAVE A CALL HOLDING! SEAFOOD!”

But it got me thinking about how important both going out dancing and “listening to records” were to us while the country was recuperating. This was before the internet and cell phones, so listening to records was how we hung out.

I tended to date record nerds, so a summer afternoon with one of them would usually start with a couple of hours of browsing through dusty bins of vinyl in a college town record store, housed in some damp basement. Most likely, I was dressed like Annie Hall, after Diane Keaton, one of the original thrifters.

Then we’d probably stop for a bagel, and the day would end with me hugging my knees on his apartment floor, next to the stereo that was perched on an orange crate. He’d light the candle that was stuck in one of those orb-like Mateus wine bottles (which we’d probably drunk), and then he’d put on a song like this:

(Just click it, and you’ll go right back to the days before manscaping, when there was plenty of man hair to run your fingers through. Though it is missing the nervous running commentary from the guy you’re with, explaining about who wrote it, who’s playing on it, who’s singing backup, who wrote the liner notes…and the whole time you’re thinking, “aw, shut up and kiss me.”)

Seriously, this is what we did back then. You 20-somethings outta put down your phones and try it. You’d probably have more sex.

So the country got back on its feet, and in the late 80s, I married a guy with a true appreciation for vintage style and a great big record collection.

As for the UltraSuede yardage, I’ll be back with more about the Halston section of the exhibit, which is the better part I think, and photos of some classic Halston designs turned inside out, found digging around in my sister’s closet.

51 thoughts on “Yves St. Laurent, The Birth of Vintage, and Listening to Records and Kissing”