Okay, I’ll admit it; I’m a Breton top abuser. Right now in my drawers and closet there are at least 10 shirts in this classic style in various colors and fabrics. Walking around the grocery store, I see that I’m not alone. You put one on, and it’s not like you’re wearing a T-shirt, right? You’re not a slob–you’re Audrey!

So it’s no surprise that patterns for boatneck tops like this have been among the most popular releases this year.

The latest is this pattern from Tessuti for the “Brigitte” Top, which I like because it has a high boatneck line, and four options for sleeve lengths:

I’m assuming the Brigitte it’s named after is Bardot:

(Love it with the red pants, red shoes, red car…)

Another pattern released this spring is the “Coco” pattern from “Tilly and the Buttons,” for both a Breton top and dress:

She always manages to get her dimple lit just right.

And I’m assuming that the “Coco” this pattern is named after is Mademoiselle Chanel, who stole this look from the boys in the 30s, and basically started the “girl in a jersey shirt” thing.

(At the end of the post, you’ll find a pinterest page with links to all of the patterns shown in this post, saving me hours of cut and paste…)

Those of you hanging out at Jet Set Sewing over the winter already know that I have a thing for this style, as I wrangled with making a 60s “crushed boatneck” pattern for about six weeks. The resulting knit version, with matching Chanel-style bag, looks like this:

(Details of how I made it are here.)

I recently saw a Burberry version of this style, with the boatneck folded out: 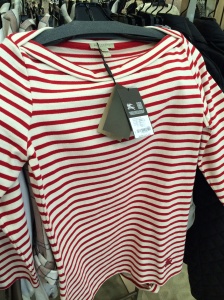 For $250! I wouldn’t say that stripe matching is very impressive, either.

What is the enduring appeal of this style?

Bonjour sailor, new in town? My sewing pal Carmen (of the CarmencitaB blog), who lives in Breton, France, told me that the original inspiration was the French Navy’s uniform, which included a striped jersey shirt and the traditional red pom pom on the hat. Then Carmen, as I recall, you told me that nowadays French women wouldn’t be caught dead in a bourgeois Breton shirt, unless she was a rich Parisian, right? We Americans are nuts for the look, though, because secretly we want to be as haughty cool as the French.

But like the tunics I wrote about last time, this look has woven (or should I say knit) itself into western culture during the past 100 years, going from a working-man’s uniform, to a modernists’ casual-wear:

Morphing to 50s film, both mainstream and new wave: 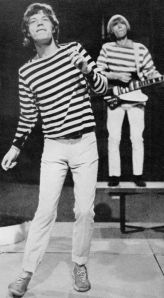 And then inspiring designers like Jean-Paul Gaultier to riff on the classic design for years.

(Princess Caroline of Monaco in Gaultier)

And the look is still a modern girl’s best friend: 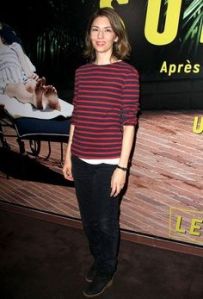 (Sophia Coppola and the Duchess of Cambridge)

Over stateside, this look has become a wardrobe staple, (or default, in my case) so let’s all save roughly $225 and make our own, shall we?

In addition to the “Brigitte” and “Coco” patterns, there are a number of patterns that can be used to create this style. Once you’ve found a favorite, and have it properly fitted, these tops can be easy to crank out (if you have the patience to match those stripes). If you’re not accustomed to sewing with knits, Colette Patterns has just released a new book, The Colette Guide to Sewing Knits, with a lot of up-to-date information.

Here are some other Breton shirt patterns that are out now:

These two are from BurdaStyle. The one on the left has a chic Audrey-like band detail across the top, and the one on the right is fitted for larger sizes, and can be color-blocked:

I’ve tried this pattern from New Look, and it’s authentic and easy:

This Sandra Betzina pattern, Vogue 1363, can be made with or without darts, making for better fit options if you’re busty. I would bring up and straighten out that ballerina neckline a bit to make it a true boatneck. This pattern goes up to a 55″ bust. 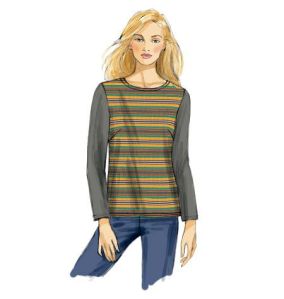 And here’s a recently re-released Simplicity vintage pattern, which can be made with a woven:

I really like the French darts and dropped shoulders on that one.

Here’s where you can find the links to all of these patterns, as well as pictures of the zillions of celebrities who’ve used this look to pretend they’re not wearing a T-shirt.

In my last post, I found I touched a nerve writing about the history of the tunic, as many readers confessed to having tunic moments in their past.

Some of you are making tunics this summer, and I’d love it if you would send photos to me so I can post them. Lynn, Lizzie and Mary, I’ll be looking for photos from you! If anyone else is making a tunic or vintage-style beach cover-up, please send it my way. My email address is under the “about” tab above.

As for me, seconds before I was going to cut that modern Vogue tunic pattern: 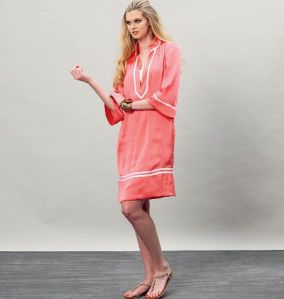 to make a Tory Burch “homage” out of striped linen, I had a change of heart, and decided to try to recreate this 40s beach robe instead:

Unfortunately, even though the pattern is a vintage size medium (which usually runs small), it turned out to be enormously wide under the arms. So I’ll be posting pictures when I’ve gotten it fitted and it stops looking like Gertrude Stein’s bathrobe.

In the meantime, I’m waiting for a new arrival in my summer sewing Batcave. (No, not THAT kind of new arrival…good grief, it was bad enough that I had my baby at 44…) I’ll let you in on my new bundle of joy when it arrives next week. Actually, it’s more like dreamy personal assistant that never talks back.

I hope your summer sewing is going well!